I ordered this book the second I found out about it, which was in July as it was released for it’s 25th anniversary. It took a lot of restraint but I decided to wait until October to read it. 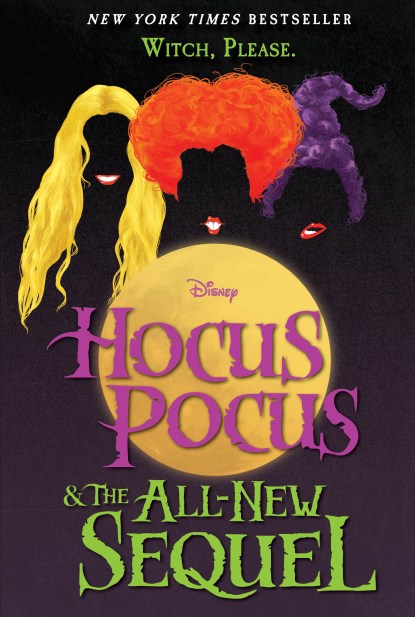 Surprisingly I didn’t have the highest expectations for this book. I wanted to commemorate the anniversary but also feel that Hocus Pocus doesn’t need a sequel. Winnie herself, Bette Midler, wouldn’t be happy with a film sequel and I agree. However a book sequel was more appealing to me, because it means it won’t necessarily be considered canon and doesn’t run as much of a risk as tainting the original. (For example because Cursed Child is a play the Harry Potter fans who don’t like it get to pretend it didn’t happen.)

Hocus Pocus and the All New Sequel, not only is a terrible name, but is about Max and Alison’s kid meeting the witches. I didn’t even think Max and Alison would stay together forever after the movie.

However, their daughter, Poppy, turned out to be a likeable character.

The story takes place on the 25th anniversary of Max and Alison’s encounter with the Sanderson sisters – which is this Halloween. As it’s a blood moon they decide to throw a Halloween party to keep the teenagers of Salem away from the Sanderson house.

Poppy, not believing her families story, and being a true Dennison, sneaks out with her friends to the house, and ends up bringing the witches back. We also get to see familiar characters such as Binx and Emily who I didn’t think would make an appearance.

Overall, it’s a good enganging story, and they pulled off bringing Hocus Pocus into the modern age well. Furthermore it did a great job with representation – it’s refreshing to see LGBTQ+ and POC characters who’s story arc isn’t about them being a minorty but rather that despite the plot they just so happen to be who they are.

However some moments were too cheesy and cringy but I guess that’s what happens when Disney releases books.

Overall it was good and didn’t taint the original but I wouldn’t consider it canon.

3 thoughts on “Book Review: Hocus Pocus and the All New Sequel”