When the First Seven Week’s posted a list of the 20 places to get coffee on campus I took it as a personal challenge, so I pulled fellow Journalism and New Media student Liam (https://winterishereblog.wordpress.com/), and occasionally HPSS student Andrew, with me on a coffee quest to try all of them. We added a few “bonus rounds” of seasonal menus, special roasts, and pop up coffee to the list – mainly to make up for missing a few. After spending the semester in cafés in buildings we have no business being in, embarrassing ourselves though awkward experiences when ordering, and not only looking but getting lost at all times, we feel we learned quite a bit. Needless to say, so far this semester, most of our knowledge acquired in UL has been coffee based.

Scholars: Definitely the best, it was rich, smooth, and reasonably priced at €2 for a regular Americano.

Stables: It was the cheapest as it costs €1 before 10:00am (then goes up to about €1.35) so it’s handy for any early starts. It wasn’t astounding or anything, but still pretty good, it left a little bit of an after taste but that’s all, other than that I liked it.

Café cube & The Grumpy Mule: They both have the same coffee and dear sweet Jesus no. It tasted murky and dirty, and not so much like coffee at all.

Spar: I will admit to personal bias here. I adored Tim Horton’s coffee but one might have noticed that Spar now supplies Seattle’s Best. Unlike the name suggests, it’s not the best (because I think Tim Hortons was) but it is a decent substitute and good value because you get a generous amount of coffee, in comparison to most places, for €2.

Café Verde: it wasn’t particularly impactful, by that I mean it was average coffee. I wasn’t retching like The Grumpy Mule or wowed like Scholars.

Millstream: Getting into the café itself was an adventure. After Liam literally kidnapping our “Mexican accomplice” when the statement of “grab Andrew” was taken literally, we went into the Millstream building, down stairs, through a tunnel – which had a pretty cool view of the living bridge – and then up more stairs only to be told they weren’t serving and to find that there’s a door on the side of the building we could have used instead. We went back at three different times, on three different days to be met with the same thing. It was the most expensive so if a day comes where we actually get served, I have my standards set high.

Subway: They looked at us funny seeing as Starbucks was right behind us. It was €3 for coffee by itself so for another euro we got subs too… they specialise in sandwiches for a reason. I felt the coffee was watery and a tad flavourless, but at least the sandwich was good! 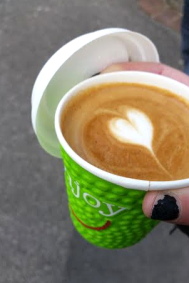 uesday Market Stall: I liked it, not the greatest coffee ever but a decent cup nonetheless.

Eden: Eden’s regular coffee is pretty good, but what we referred to as the “Fancy Eden Coffees” were better. I’d put the Connoisseurs Roast after Scholars in terms of the best coffee. There was a mild nutty taste, rich flavour and it wasn’t too acidic. Jinotenga Sunrise (what a name) was a strange one. It tasted similar to the Connoisseurs Roast except there was a weird berry under-taste. It wasn’t bad, it was just unusual.

Starbucks: The coffee itself is over-rated. Their Americano’s aren’t special. It’s like Subway in the sense that it doesn’t actually taste all that much like coffee, but I would still rate it above Subway.

We couldn’t find Lonsdale. Went through MSSI building being judged by all where Liam pushed Andrew into a room on the top floor with people already in there, we climbed a lot of stairs, and after all three of us being sufficiently mortified we decided to give up and test the Starbucks Christmas menu instead.

We got declined eggnog lattes twice (because Starbucks tends to run out of things) before finally getting it. It was the one I was most excited for. I feel the mixture of eggnog and coffee was perfect as neither overpowered the other, but eggnog is essentially diabetes in a carton so I’ll save it for bad days. On the first sip of the gingerbread latte we were hit 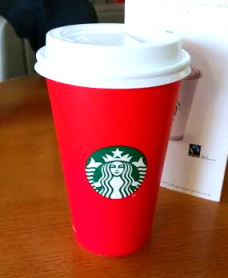 by an overwhelming taste of ginger, followed by cinnamon. Which is… well what gingerbread tastes like but there was a lot of ginger. It was quite luscious but our opinions varied. I’m used to Nescafe’s Gingerbread Lattes so it was stronger than I’m used to but I still enjoyed it, Liam felt it was “eh”, and Andrew doesn’t like ginger or coffee so obviously he didn’t take very well to it (He also dunked chilli Doritos into the foam – don’t do it). Toffee nut turned out to be my favourite thing on the menu, when it was originally the one I felt hesitant to try. I was anticipating something sickly sweet but I was mistaken. There’s a mild nutty flavour with a sweet toffee after taste so I see a potential holiday addiction.

The vast majority of the café’s on campus serve Bewley’s or Café Noir, so you pretty much get the same coffee everywhere. I find it difficult to decide which one I prefer. They’re both quite bitter but the coffee is always consistent so you’re pretty much guaranteed a good cup.

The Café Noirs are in:

Bewley’s is served in:

The verdict: On average you can get a regular Americano for €2 in most places, the price doesn’t fluctuate by that much (unless you opt for Starbucks, or Millstream serves you!). I’ll update this if we find anywhere else or get Millstream. This is all subjective and based on my own opinions. I’m no coffee expert, but it does make me happier than anything should so my standards are high and my love for it is deep. I had a lot of fun on this little quest and now that it’s essentially done I’m not sure what we’ll be doing with ourselves come semester two. We may end up lounging in Scholars or Eden for the year, or maybe we’ll undertake another challenge to amuse ourselves.

(All the pictures but the first are mine)

2 thoughts on “Coffee Quest: Best and Worst coffee in UL”